My greatest inspiration is to improve myself

Čorki, or Stano, joined our team more than a year ago and became part of the Test Specialists family. Like our other employees, Stano loved the world of IT in high school. After college, his IT journey continued, and he developed his career in various large companies. In the end, he ended up with us, doing what he enjoys the most. In addition, he enjoys playing PC games and riding an electric bicycle with his 2-year-old son.

What was your IT journey?

My journey towards IT started at secondary industrial school, where I studied the field of technology and IT services. There, I and my classmates first met in a classroom full of beautiful new PCs, where everyone had their own desk with a computer. I started to like this environment and I already knew that I wanted to work in such clean rooms, where it was warm even during harsh winters. I went on to study at Technical University in Košice, Faculty of Electrical Engineering, in the field of software engineering, and through NESS, IBM, Astound Commerce, I got to Unique People.

How was your trip to UP?

I started working at UP in March 2021. It has been more than a year. After the birth of my first son, I took a six-month break from IT and mentally turned off and clarified what I wanted to do, so that after more than 10 years of experience as a developer, I still enjoyed it. I decided that until the situation with growing frameworks stabilizes, I would focus on automated web testing and leave the development for the younger generation. If the situation calms down in the future and the times come when it will be possible to program in one language and syntax for most devices, websites, then I will be interested in returning to the world of developers, but in my lifetime it will probably not happen. I prefer the philosophy that, as we have one universal language in the world - English, it should be similar to the programming language. Otherwise, we will endlessly learn various foreign - programming languages, which one can no longer use when working with our neighbours. On the contrary, when testing websites, it doesn't matter what language the website is written in. I'm already working with a ready-made website that I can automatically test in any programming language and, at worst, always use common sense and two eyes.

I liked it here from the beginning. I have the opportunity to use a programming language and tools that suit me and I like to work with colleagues from Slovakia. So far, I have worked mainly for foreign companies, where it was necessary to communicate exclusively in English, which does not bother me. There are great colleagues and also a great atmosphere. There are about 80 to 100 people here in UP and one knows and can get to know most people in the company. Trivia like attention to Mikuláš for children or summer teambuilding are unforgettable experiences. I can't help but highlight the fantastic communication of my colleagues. Thanks to them, there is never a dull moment at meetings, which I admire and I am happy about. I have heard a little Slovak at meetings in recent years and this is also a thing that makes me smile every day. Little things that you only realize after a few years at English meetings.

What are you currently working on?

I am currently working on a website of a health insurance company, where our team develops some parts and I check them at the end. I also continuously work on control of internal and customer small websites, which our company UP will receive for production. These include various smaller and larger websites of local companies, which I like since I deal with products in my home country.

At UP I am very satisfied, I think I found from a wide selection of IT exactly what I enjoyed the most.

What was the most interesting project you have worked on with UP?

The most interesting thing for me personally was the launch of my test system and integration with Gitlab, which UP uses. Since then, I have more or less used it in every other project.

I don't know if it can be called an IT dream, but I'd like to develop hardware for cars that can display and illuminate animals and other thermally recognizable dangers directly on the car's glass at night using eye-tracking and transparent OLED film and thermal imaging.

What do you think IT's future will look like?

I see Terminators and Skynet in the future :)

What do you consider a highlight of your career?

Working for IBM. I would have never said that I would get into such a company, but in the end, it turned out that it was just the same company like any other, I realized that even smaller, more local companies can compete with such large companies and, in my case, a little more than that.

Who or what inspires you the most?

I myself :) but mainly new technological inventions and advances at the frontier of knowledge.

My greatest inspiration is to improve myself.

Tell us something interesting about yourself

I've accomplished everything I've ever wanted in my life, so now I'm just enjoying life with my 2-year-old son. When I was young, I played streetball and now I like to ride electric bikes and play PC games, especially World of Tanks :) 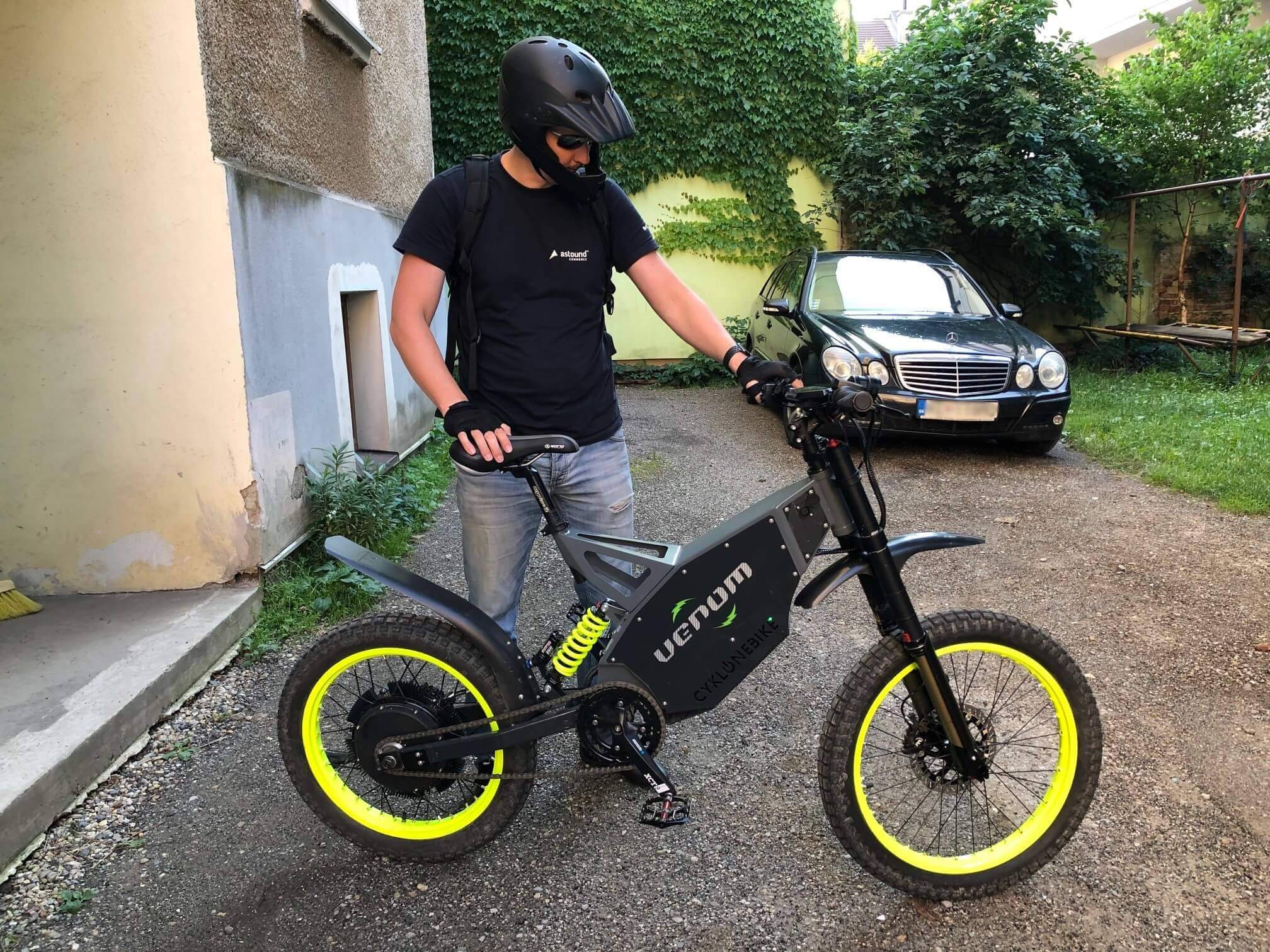 More about uniqueness
International Students’ Day...
Have you ever been told that you are too young to achieve something? Forget about it now, please. Let us remind you that it was young people who stood up in the Velvet Revolution that brought systemic change. Not only Velvet Revolution, but International Students’ Day is also tied with 17 November. Why is it so? In the following lines, we will dig a little bit into history to explain the connection. Since we are celebrating International Students’ Day, you will also have an exclusive chance to get to know our youngest colleagues. Gen-Z part-timers that make our teams complete study hard. We believe that it is very important for students to be active in society. Our students contribute to company´s unique spirit. Fresh ideas are always welcome. We are happy to see young people that care about their future and not only study but also try to implement their ideas at work. It is crystal clear that the voice of determined youth can bring positive changes.

Soňa Hegedušová
Naturally, if someone feels uneasy at work or wants...
Majo has been passionate for IT since his early childhood. Despite the fact that he likes his job, he said that he never sacrificed all of his time to work. Football, beer, gardening and his family may be considered his hobbies. Keep reading and you will get to know our developer.

Soňa Hegedušová
Stay safe online. Don’t be quick to click...
I bet you have seen the “You’ve Won” scam several times by now. There are innumerable threats on the Internet. You may encounter phishing, malware, computer viruses, botnets, password attacks... The list is endless. Your security is the most important, though. So, let’s focus on protection. Preventing cybercrime is our shared responsibility. If you don’t want to become a victim, if you don’t wish to get hacked, keep reading. Awareness is the key factor in prevention. October is the month dedicated to cyber security. The European Union Agency for Cybersecurity’s campaign sounds quite catchy, so remember #ThinkB4UClick. To sum it all up, the Internet is definitely a dangerous place with a great deal of menace. If you used to wonder how to stay safe online, we hope your question has been answered after reading our tips. The only advice we can give you now is: Take action! Be aware of cybercrime, stay suspicious and you won´t get tricked.

Soňa Hegedušová
Not a moment without music...
Not a moment without music. This is how we would define Patrik Huba who found his way to IT in early childhood. During high school, he started working on websites, which strengthened his decision to focus on IT. He joined our company in 2019 and we are very happy that he is a part of our team. He is a Junior Front-End Developer and the projects he is working on challenge him to improve himself and move forward. After hard work, he likes to relax doing various sports activities.

You can find out more about which cookies we are using or switch them off in settings.

This website uses cookies so that we can provide you with the best user experience possible. Cookie information is stored in your browser and performs functions such as recognising you when you return to our website and helping our team to understand which sections of the website you find most interesting and useful.

Strictly Necessary Cookie should be enabled at all times so that we can save your preferences for cookie settings.

If you disable this cookie, we will not be able to save your preferences. This means that every time you visit this website you will need to enable or disable cookies again.